We are delighted to offer this blog post from Tom Zaniello, a walking encyclopaedia of labour cinema and a regular contributor to our festival….please note that Tom is from the USA, so you may notice some Americanisms. We chose not to edit these out for fear of cultural misappropriation. I have added some hyperlinks to make it a little easier for you to find the films that Tom discusses. Enjoy. (AnnaB).

It is time to assess the cinematic record of the cultural effect of the public’s conception of the Covid-19 epidemic, especially as it impacts the communities of the poor, the working class, and people of color. Such an assessment is not easy, of course, because the films seem to have settled down into predictable genre patterns, that is, we get films that scrutinize Covid strictly as a medical event, middle-class angst Covid films, post-apocalyptic and speculative fiction Covid films, and working-class impact Covid films.

There are already a surprising number of Covid-19 films: at last count (January 1, 2022), six feature films, nine short fiction films, fifteen documentaries, and one pilot episode from the UK of a fictional TV series. Four of the features are related to Covid-19 explicitly; the other two and all the short fiction films are Covid-19 inspired or inflected; three of the documentaries focus on Wuhan, the supposed Chinese epicenter of the pandemic. With only one exception—Plandemic (2020) is Trumpian anti-vaxxer nonsense—the documentaries are very solid and informative. The most explicitly political documentaries, not surprisingly. perhaps, are by Naomi Klein and Ai Wei Wei, the former continuing her anti-capitalist campaign in Coronavirus Capitalism: And How to Beat It (2020), the latter an anti-authoritarian critique of the Communist Chinese leadership in suppressing information about Wuhan, locus of the Chinese outbreak in CoronaNation (2021).

James McAvoy and Sharon Horgan star in TOGETHER written by Dennis Kelly and directed by Stephen Daldry.

Although my classification sounds a bit snarky, the middle-class angst films are nonetheless worth seeing. Together (2020) features a London couple in relationship-fatigue as they self-isolate and spend their time snapping at each other: what else can we expect when a Libral marries a Tory?! In 7 Days (2021), another love match, this time arranged by Indian mothers hyping their offspring on an online marriage site, brings two unlikely Americans of South Asian families together when their arranged date becomes a farce of enforced Covid quarantine. Turns out, of course, that he’s actually the good cook his mum boasted about and she has a very active sex life her mother hardly knew about. Cinephiles can guess the outcome of this enforced match-up. Quite a similar set-up is in one of my favorite Sundance films from last year—The Pink Cloud (2021), in which a mysterious but lethal “pink cloud” of toxicity descends on a Brazilian city where a couple is obliviously locked in numerous embraces. Imagine their surprise when an endless night turns into endless years of quarantine.

Songbird is a 2020 American dystopian science fiction thriller film based on the COVID-19 pandemic. It is directed by Adam Mason, and produced by Michael Bay.

Although The Pink Cloud is a speculative and somewhat science fiction-y, Songbird (2021) is aggressively future-scene. I think it never deserved the bashing it received from critics, mostly in the UK. I think the producers and creative team were considered stroppy for daring to do a Covid film in the middle of the quarantine. Or the spectre of a Covid-19 successor turning our world into post-apocalyptic horror might have been scary in and of itself. Any checking with the norms of epidemic cinema would have revealed a perfectly convincing, well-executed viral procedural.

Another future-scene survivalist horror thriller, In the Earth (2021), argues in effect that the pandemic you know may be safer than the natural—or even occult— encounter when you pursue the origins of an epidemic. Four researchers carrying out extensive research on the mycorrhizal network of tree roots and fungi in a strange forest that “communicate.” The director Ben Wheatley has said that this was a Covid-19 film both in execution—the low-budget film made in isolation and a small crew–but also in the plot.

Covid films that concentrate on the medical aspects of the pandemic represent a very solid class of documentaries. Besides Ai Wei Wei’s Coronation, we have in Days and Nights in Wuhan (2020), China’s official version of the outbreak of the virus in Wuhan—it’s not their fault—and Coronavirus Explained (2020), with its careful outline of the early warning, dating from 2019 and earlier, about the implications of a terrible pandemic before Covid-19 had been so identified. Another Wuhan doc is In the Same Breath (2021), using “smuggled” e-mail footage from Chinese hospitals, comparing China’s handling of the crisis with the USA. The director, Nanfu Wang, was already in big trouble with Chinese censors for One Child Nation (2019). her expose of child-birth restrictions.

Other documentaries that have identified the factors in the spread of the virus and how political maneuvering often hindered securing the people’s health and safety include Coronavirus Explained (2020), outlining the often-missed warnings about the pandemic. and Inside Italy’s Covid War (202), set in hard-hit Cremona, where doctors and medical staff took the lead in one Italy’s worst outbreak cities. Fauci (2021) and The Virus: What Went Wrong (2020) document two crucial moments in the midst of the pandemic: the former explains how the leading American immunologist, Anthony Fauci, learned during the HIV/AIDS epidemic in the 1980’s that the patients should not simply be treated as victims but had to be involved in the process of discovering a solution to the pandemic, and the latter demonstrates the resilience of hospital workers in the early stages of how New York City coped with crowded hospitals and understaffing. Coronavirus Pandemic (2020) explains how Washington state maneuvered well in the early stages of the pandemic. comparing how it handled the pandemic in comparison to the pathetic leadership of Trump, his family, and other lackeys,

A strong stand-out among documentaries is Totally Under Control (2020), directed by Alex Gibney, whose earlier film, Enron: The Smartest Guys in the Room (2005), exposing the corporate crooks of Enron was credited in part with their final exposure as criminals. Gibney’s Covid doc is the clearest and most-detailed argument for the duplicity and ineptitude of Trump and his administration. Gibney argues that Trump and his cronies deliberately misled us and caused untold harm to Americans. Similarly, The Virus: What Went Wrong (2020) clearly enumerates Trump’s ignorance and deliberate missteps.

76 Days is a 2020 Chinese-American documentary film directed by Hao Wu, Weixi Chen and an anonymous third.

The danger to medical professionals and workers in hospitals and other care facilities has been extensively examined by a number of the strongest documentaries available. 76 Days (2021), for example, tracks events in Wuhan in the first three months of the outbreak of Covid there. Corona’s Hidden Toll (2020) details the lethal and financially crippling situation for American farmworkers and meat processing workers who worked in unprotected situations.

Two of the earliest films include a short feature Corona 2049: End of the World (2020: https://www.youtube.com/watch?v=8Gm9RYZCsPs) follows one person in a bleak post-apocalyptic landscape and asks the question, “What if corona is not a sickness but a cure, and we [humans] are the virus to the earth?” and Corona: Fear is a Virus (2020), the first Covid-19 feature film of passengers in a stopped elevator hostilely confronting a Chinese-Canadian nurse who is from Wuhan.

One ingenious solution to the difficulty in the distribution of short films is to combine them thematically in one feature-long package. That is what director Jafar Panahi does in The Year of the Everlasting Storm (2021), an anthology of seven short films with Covid-inflected situations. There are two stars in his opening film, Life, as the director continues his decade-long house arrest in Tehren—another kind of quarantine!—and his string of brilliant films: his ninety-plus year old mother and Iggy, his pet green iguana. The latter, four or five feet long, has more personality than most politicians I could name and he never says a line. Both mom and pet are survivors during the pandemic and we applaud them. This is certainly one of my “don’t miss” films.

So far the BBC has blocked this American’s access to the pilot of Pandemonium (2020), the only comedy TV series in the works that tracks a British family’s attempt to salvage their cancelled summer holiday—due to Covid-19 travel restrictions—by driving down to Margate. This is as far as they get: 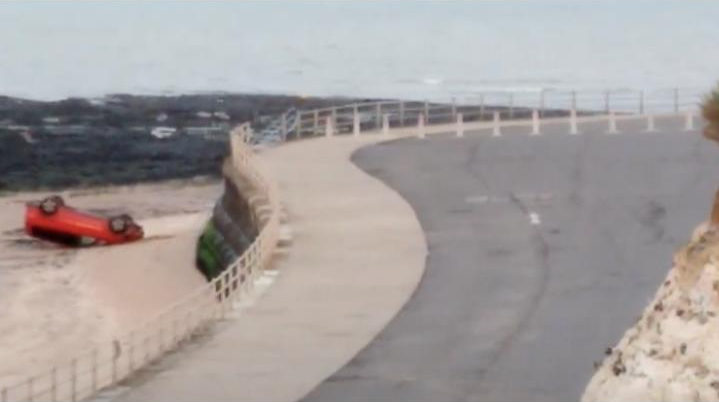 I know car crashes are not funny, but please let me know how it ends: we all need cheering up about now.

TO VIEW A WATCHLIST OF THE FILMS MENTIONED IN THIS ARTICLE, CHECK OUT OUR COMPILED LINK: